The New MLK Sculpture Is Officially a Meme 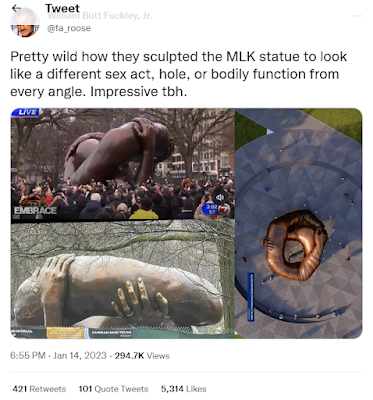 On Friday, January 13, the city of Boston unveiled a 22-foot-tall bronze sculpture of Martin Luther and Coretta Scott King titled the “The Embrace” (2023). The headless and bodiless memorial in Boston Common, created by artist Hank Willis Thomas, is based on a photo of the couple hugging after Dr. King won the Nobel Peace Prize in 1964. Butwhile some praised the new statue, others, like the Washington Post’s Karen Attiah, argued that the artwork de-radicalizes and de-racializes King’s legacy, and many have raised an entirely different issue with the design: From some angles, the bronze memorial can appear to depict multiple lewd acts.

“In time we will see this statue for what it truly is … Martin Luther King going down on his wife,” said Leslie Jones, host of the Daily Show, in a segment this week. Correspondent Dulcé Sloan joined to express a different point of view, adding that from another perspective the work looks like “hands cradling a big penis” and calling it a “sexual Rubik’s Cube.”

Martin Luther King Jr. and Coretta Scott King first met when they were students in Boston, and in 1955, Dr. King led a 20,000-person march from Roxbury to Boston Common, where “The Embrace” now stands. The civil rights leader also delivered a powerful speech in Boston in 1963, in which he warned of the perils of Northerners’ disinterest in the Civil Rights movement happening in the South, and another in 1965 on “de facto segregation.” This rich history, and the question of whether “The Embrace” does or does not represent it, may be precisely why the sculpture has sparked such heated discussions — especially given that it’s not the first time an MLK monument falls short of expectations. In the Daily Show, Sloan pointed to the leader’s memorial in Washington, DC. “This man literally marched for freedom, and he has no legs!” she said.

The sculpture’s $10 million price tag has also raised eyebrows. Some pointed to causes toward which the money may have been better spent, such as alleviating America’s homelessness crisis. In a tweet, user @thatgirlkeeee suggested that the money also could have gone to Black communities instead of toward creating a “symbolic gesture.”

“It is sending a whitewashed, multi-million dollar message,” Attiah of the Washington Post wrote in a series of Tweets about the new sculpture, stating that the disembodied figures continue a pattern in which White America “butchers” the legacy of MLK with cherry-picked quotes about love and non-violence. “While ignoring his radicalism, anti-capitalism, his fierce critiques of white moderates,” Attiah continued. “MLK — in his fullness — is still too much for them.”