​The probable origin of the Kensington Runestone's runes has been found: The runic alphabet from the stone, with its distinctive "hooked X," was taught in a mid-19th century Swedish calligraphy school and the textbook its instructor published. It includes "Masonic" characters like those used by the Larsson brothers, whose runic writing had previously been the only other known runic use of the "hooked X."

​Magnus Källström of the National Antiquities Office in Sweden published the results of his investigation last week. The key was in an 1876 textbook published by Eric Ström, an itinerant calligrapher (!):

Through a rave review that was published in Medelpads Allehanda on September 2 of the same year, it is also possible to form an idea of ​​the content of this writing.  In the part devoted to runic learning, Ström is said to have, among other things, reproduced a couple of runic alphabets, one of which, according to the anonymous article author, consisted of "some very strange letters and signs for numbers, which must have been imagined by some scoundrel." be "ancient writing"" This can hardly have been anything other than a reproduction of the Kensington runes and the pentadic numerals that appear on the Kensington Stone.

In addition, there must have been another alphabet, which according to the author of the article only consisted "of squares and parts of squares with one or more dots in them". This must of course have been a reproduction of the so-called Masonic cipher. It is now quite clear where the Larsson brothers in Dala-Floda got their runes from. They have of course attended one of Ström's writing schools or come across a copy of his Regulations . Thus, one of the direct connections to Dalarna also disappears, because we know that they were often out on trips.

Eric Ström was also a Templar--but not the kind you are thinking of. He was a Good Templar, a member of a temperance society.  He had been teaching his various alphabets for a long time, after learning runes (or, rather, an eccentric local approximation of them) from a single person somewhere in the middle of northern Sweden.
This practice sheet is from 1864: 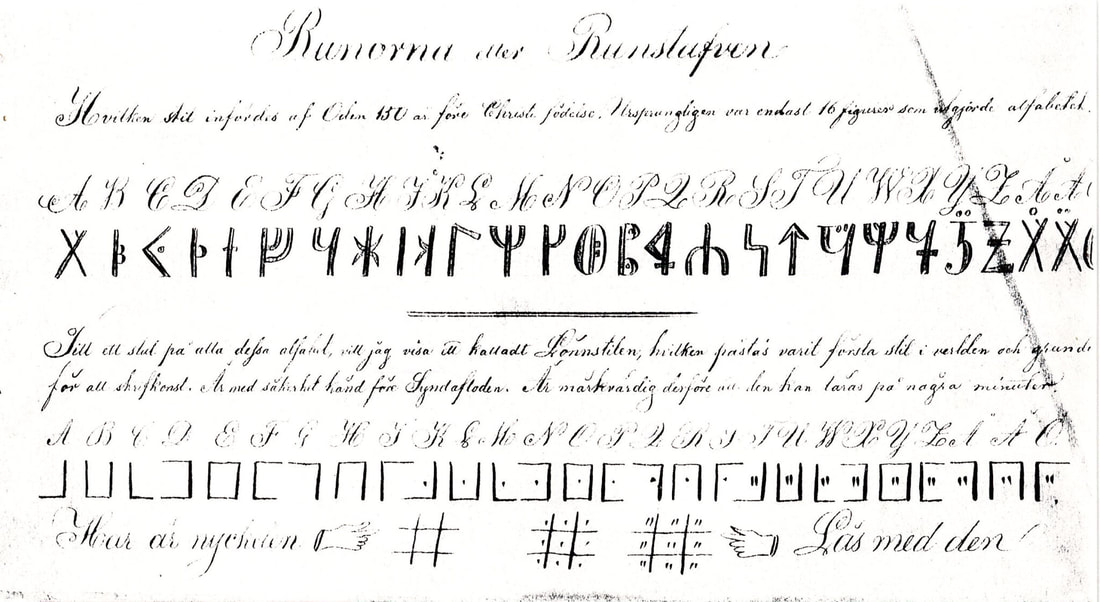 According to Källström, the alphabets changed over time due to copying errors, so there is an older set from the middle 19th century and a younger set from the late 19th century. "A funny fact is also that the Kensington Stone belongs to this younger group! Since Edward Larsson uses the older variant as late as 1885, we have here an indication that the Kensington Stone is actually not older than that."

And so, it seems likely that this will put to bed the Kensington Runestone "mystery"--or it would if there weren't an industry devoted to exploiting it.

[the handwriting used by Olof Ohman the "discoverer" of the Kensington Runestone in a 1879 letter matches the cursive letters used by Ström. Maybe a coincidence, but another of a plethora of coincidences that surround this fake artifact.]