But what was it?

CHANCE OF STORMS TODAY: NOAA forecasters say there is a chance of G1-class geomagnetic storms on Nov. 4th and 5th as Earth continues to pass through a stream of fast-moving solar wind. The gaseous material is flowing from an equatorial hole in the sun's atmosphere. Yesterday, the same stream sparked spectacular pink auroras inside the Arctic Circle.

MYSTERIOUS BLUE "AURORAS" OVER SWEDEN: Yesterday in Sweden, sky watchers were puzzled when a strange ribbon of blue light appeared during a geomagnetic storm. "It didn't look like any auroras I have ever seen before," says Chad Blakley, the director of Lights over Lapland.

One of his tour guides, Miquel Such, video-recorded the phenomenon: video above

A G1-class geomagnetic storm was underway on Nov. 3rd when the blue ribbon appeared. Webcams saw it first at 1615 UT (5:15 p.m. local Abisko time). It rapidly brightened to naked-eye visibility, then sank below the horizon 30 minutes later. The whole time, regular green auroras danced around and seemingly in front of it: movie.

But what was it?

Space physicist Toshi Nishimura of Boston University took a look at the video. "It looks really odd if it's aurora," he says. "One auroral arc shouldn't cut across another auroral arc without disturbing it, so it's hard to explain this from an auroral physics point of view." 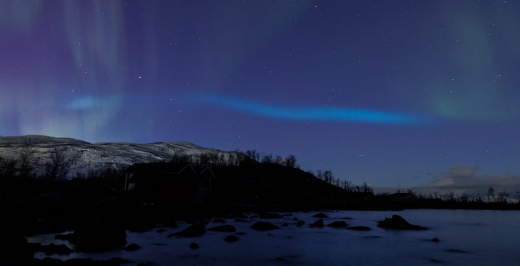 Another possibility is rocketry. Since late October Russia has been conducting ICBM firing exercises in the Barents Sea with the nuclear-powered missile cruiser "Peter the Great" in the area for combat training. Rocket exhaust has been known to create displays like this in the past.

However, no one saw a rocket. Multiple witnesses in Abisko agree that nothing streaked across the sky before the blue band appeared.

For now, the blue ribbon remains a mystery. Any photographers who caught it are encouraged to submit their images. Photos from different locations may help determine the height of the emission. And, of course, if anyone saw a rocket, let us know! 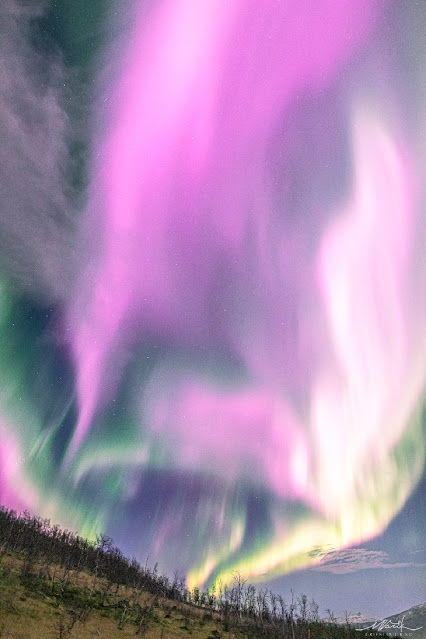