'BOAT', or Brightest Of All Time

POWERFUL GAMMA-RAY BURST MADE CURRENTS FLOW IN THE EARTH: Astronomers have never seen anything like it.

On Oct. 9, 2022, Earth-orbiting satellites detected the strongest gamma-ray burst (GRB) in modern history: GRB221009A. How strong was it? It caused electrical currents to flow through the surface of our planet. Dr. Andrew Klekociuk in Tasmania recorded the effect using an Earth Probe Antenna: 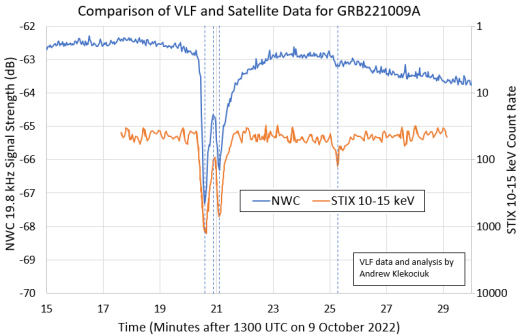 Note: STIX data have been flipped (increasing counts go down) to ease comparison of the two waveforms.

The blue curve is a signal from Klekociuk's antenna, which was sensing VLF (very low frequency) currents in the soil at the time of the blast. The orange curve shows the gamma-ray burst recorded by the STIX telescope on Europe's Solar Orbiter spacecraft, one of many spacecraft that detected the event. The waveforms are a nearly perfect match.

"I am a climate scientist at the Australian Antarctic Division--that's my day job," says Klekociuk. "VLF is my hobby. I started doing VLF radio measurements in the 1970's when I was in high school. This is the first time I have detected a gamma-ray burst."

Klekociuk's unusual "ham rig" uses Earth itself as a giant antenna. In his back garden there are two metal spikes stuck into the ground 75 meters apart. They are connected to a receiver via buried wires. In recent years amateur radio operators have been experimenting with this weird kind of antenna to detect VLF radio signals circling our planet in the Earth-ionosphere waveguide. Earth's crust forms one of the waveguide's walls, allowing Earth Probe Antennas to detect distant transmitters.

"During the gamma-ray burst I detected flickering from multiple stations," says Klekociuk, who made this map showing transmission paths illuminated by the GRB: 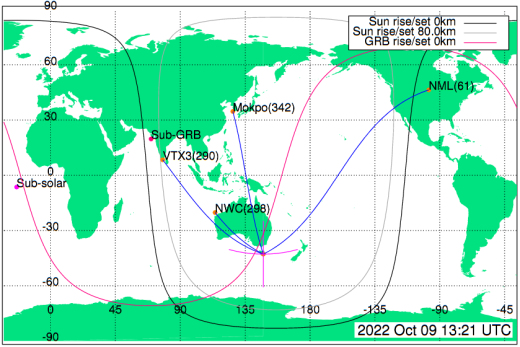 Above: NWC, VTX3, Mokpo and NML are VLF transmitters Klekociuk monitors using his Earth Probe Antenna. GRB effects were observed for all except NML, which was outside the radiation footprint.

Researchers have known since 1983 that gamma-ray bursts can ionize Earth's atmosphere and, thus, disturb the great waveguide. This appears to be the first time anyone has recorded the effect using an Earth Probe Antenna.

The outburst on Oct. 9th shocked astronomers. Consider this tweet from Phil Evans of the University of Leicester: "It's bright. Really bright. Like, stupidly really bright." Evans works with data from NASA's Swift gamma-ray observatory, and the overflowing signal had apparently broken some of his plotting software.

Data from NASA spacecraft have since pinpointed the burst. It came from a dusty galaxy 2.4 billion light years away, almost certainly triggered by a supernova explosion giving birth to a black hole. This is actually the closest GRB ever recorded, thus accounting for its extreme intensity. 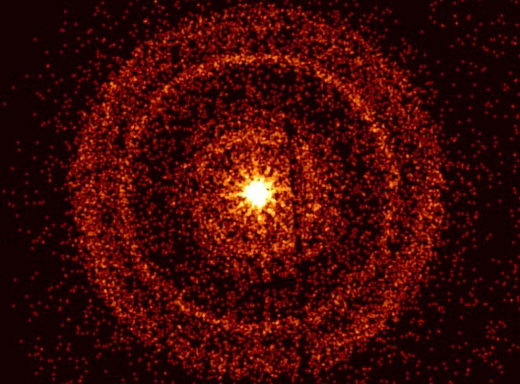 Above: The afterglow of GRB 221009A about an hour after it was first detected. Credit: NASA/Swift. [more]

"In our research group, we've been referring to this burst as the 'BOAT', or Brightest Of All Time," says Jillian Rastinejad, an astronomer at Northwestern University who has been monitoring the burst's afterglow using the Gemini South Telescope in Chile. "When you look at the thousands of bursts gamma-ray telescopes have been detecting since the 1990s, this one really stands apart."

Meanwhile, other observers in the UK and Germany have also reported ionospheric disturbances resulting from the burst. They all used regular above-ground antennas.

A sharable version of this story may be found here.