In space, huge amounts of energy are released explosively by a mysterious mechanism: magnetic reconnection.

Reconnection can abruptly convert energy stored in magnetic fields to energy in charged particles, and power such diverse phenomena as solar and stellar flares, magnetic storms and aurorae in near-Earth space, and major disruptions in magnetically confined fusion devices.  It is behind many of the dangerous effects associated with space weather, including damage to satellites, endangering astronauts, and impacting the power grid and pipelines. Understanding reconnection enables us to quantitatively describe and predict these magnetic explosions.

Therefore, magnetic reconnection has been at the forefront of scientific interest for many years, and will be for many more. Measuring reconnection is incredibly difficult. However, recently scientists have been able to peek into its machinery. Combining measurements from NASA's Magnetospheric Multiscale mission with supercomputer modeling, scientists have now been able to analyze the inner workings of this elusive mechanism. Even though open questions remain, this new understanding has broad implications.

Here, we describe magnetic reconnection, where it plays a role, its impacts on society, and what we now know about it. We point to future research challenges, including implications and the utility of our recently developed knowledge.

Earth itself acts like a large magnet, and its magnetic field is felt hundreds of thousands of miles from Earth.

The Sun also has a magnetic field, shaped vastly different than Earth's, which is felt 10 billion miles away!

The matter in space is typically a super-heated gas called a plasma. Plasmas, the “fourth state of matter” joining solids, liquids, and gases, are so hot that some or all the atoms making them up cannot stay together—they break up into negatively charged electrons and positively charged ions that move fast enough to not recombine into neutral matter. To be a plasma, its temperature must be high enough and its density low enough. It is said that 99% of the known material in the universe is in the plasma state.

In addition to producing jets, magnetic reconnection heats the plasma, which is depicted by the shading of the plasma in the jets. The heating can happen within the diffusion region or at the boundaries between reconnected and unreconnected magnetic fields. This heating can be significant—depending on the setting, up to ~1/2 of the energy released by magnetic fields can go into heating the plasma.

The reason we care about magnetic reconnection is that it efficiently converts energy, both in the form of directed motion (the jets) and random motion (the increase in temperature). It is quite common for a magnetic field to change directions, so magnetic reconnection occurs in many settings. It is the mechanism behind solar flares, enormous bursts of light in the atmosphere of the Sun, which release up to 10,000,000,000,000,000,000,000,000 (1025) joules of energy. For perspective, if we could harness all the energy released in a single large flare for human use, it would supply enough energy for the whole world for about 20,000 years! 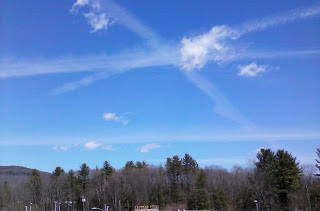 This is the origin of the auroral lights seen near Earth's poles.

Consequently, researching magnetic reconnection is a major aspect of understanding the Sun and the Sun's impact on Earth's space environment; that field of study is called “heliophysics” or “geospace sciences.”

There are numerous practical reasons we care about magnetic reconnection. When a flare occurs, it emits energetic radiation that travels through space and gets absorbed in Earth's atmosphere.  Some of the neutral material gets ionized, increasing how much plasma is in the ionosphere. This has important consequences. Satellites can go off their desired course since there is more resistance in the ionosphere. Also, satellites send signals through the ionosphere, and the path those signals take changes, just like light bends when going from air to water and vice versa.  This is called “scintillation” and impacts GPS signals as well as military, aviation, and commercial communications. The solar radiation also degrades solar cells on satellites, makes undesirable changes to instruments onboard satellites, and is harmful to astronauts. Changes to Earth's magnetic field during a geomagnetic storm drive electrical currents through conductors on the ground, which can degrade pipelines and overload transformers on the power grid.

These effects are collectively referred to as “space weather,” and governments worldwide are working to ensure readiness for space weather.

Understanding magnetic reconnection, therefore, contributes to an ability to understand the science driving space weather and its eventual prediction and forecasting.