Aluminum (TMA), Barium, Strontium, Sulfur Hexafluoride (SF6), and Lithium have been dumped in space to study and modify space weather for over sixty years and nobody knew.

Also on the 7th of July, Cern opened after a 3-year shutdown! According to Cern's website, after over three years of upgrade and maintenance work, the Large Hadron Collider (LHC) is now set to run for close to four years at the record energy of 13.6 trillion electronvolts (TeV), providing greater precision and discovery potential. Increased collision rates, higher collision energy, upgraded data readout, and selection systems, new detector systems, and computing infrastructure: all these factors point to a promising physics season that will further expand the already very diverse LHC physics program! Hmmm!

At Cern, (Conseil Européen pour la Recherche Nucléaire) the Large Hadron Collider (LHC) is the world’s largest and most powerful particle accelerator. It consists of a 27-kilometer ring of superconducting magnets with a number of accelerating structures to boost the energy of the” particles” along the way before smashing the particles together. However, many revered experts are very worried. Some experts believe, that the LHC could also produce unwanted black holes. A black hole compresses matter into a point of infinite density called a singularity. In general, most people think compressing matter like that constitutes a bad thing -- some worry the black holes generated by Cern could destroy the Earth, just like the early nuclear bomb scientists, but they don’t really know. Cern scientists say that if the LHC does create black holes, they are very small, harmless, and decay almost instantaneously, according to Cern scientists.

However, some scientists have claimed the large hadron collider is puncturing other "dimensions" which could be allowing unsavory things into our dimension.

Coincidence? The destroyer of worlds, (something JR Oppenheimer claimed he was in 1945 after testing his Atom Bomb) A Lord Shiva statue at Cern is said to be the third god in the Hindu triumvirate. The triumvirate consists of three gods who are responsible for the creation, upkeep, and destruction of the world. The other two gods are Brahma and Vishnu... Shiva's role is to destroy the universe in order to recreate it. 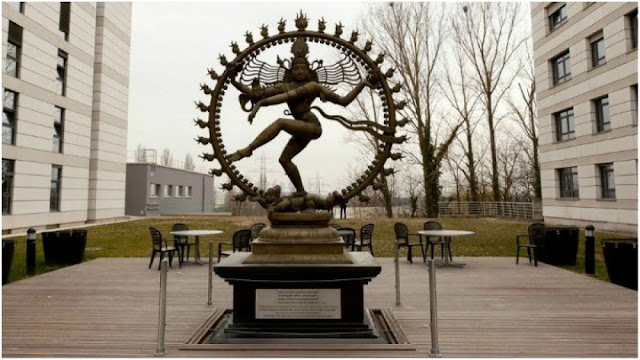 A statue of Lord Shiva stands proudly outside Cern, the Large Hadron Collider (LHC) in Switzerland, see image above.