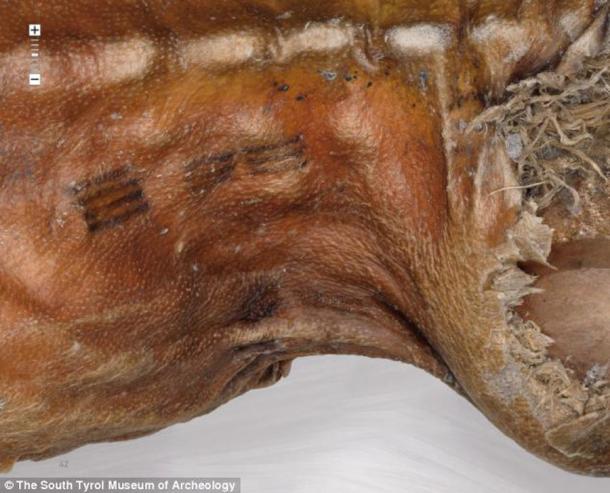 Tattoos found on the body of Otzi the Iceman. Credit: The South Tyrol Museum of Archaeology

Wilson learnt about Ötzi the Iceman in school and remembers questioning her teachers about him even then. An older Nicole Wilson , who went on to become an artist focused on sculpture and process-driven durational art, found herself obsessed with the marks on Ötzi’s body.

“The tattoos themselves are super interesting. Scientists think they might have acupuncture significance, but we don’t actually know. We can’t ask what the lines and the dashes and hashes meant to this person,” she told Artnet News . And the idea of marking her body in the same way began to dominate her mind. She thought of it as acting as a proxy for his body, a kind of compression of historical time, a closing of a historical gap as it were.

While, as Wilson says, it may be impossible to conclusively establish the purpose of the tattoos, a primitive acupuncture therapy seems the most plausible explanation. Their presence on the hardworking areas of the human body - ankles, wrists, knees, Achilles tendon, and lower back - support the notion that the tattoos were used therapeutically. “If true, this may be evidence for one of the earliest known examples of acupuncture; the practice didn’t emerge until at least 2,000 years later in Asia,” argues a 2017 article in Ancient Origins . 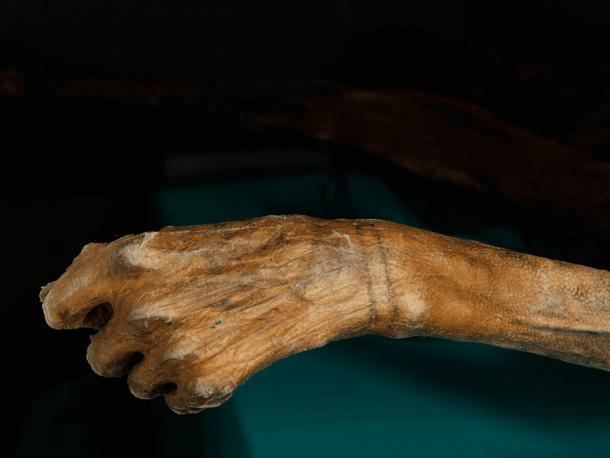 Two tattooed bands can be seen around Ötzi the Iceman’s wrist. ( South Tyrol Museum of Archaeology )

Living with Ötzi the Iceman’s Tatoos

Wilson began her immersive Ötzi the Iceman performances in 2012, getting a friend with a tattoo gun to replicate to scale and at the same places on her body Ötzi’s 59 tattoos, using her own blood and documenting the process of their fading as the blood was reabsorbed into her body. She used her blood because she wanted to literally absorb the ancient mummy’s marks.

As expected, her skin reabsorbed almost all the blood immediately, but as her skin healed, the heme (the pigment within blood) left dark scars. Over the next four years, Wilson photographed her body as the marks healed, at first conspicuously and then more slowly, growing fainter and fainter and then vanishing completely.

In this period, she experienced living with the scars and explaining them to people who were curious about them. According to Artnet News , she said, “It’s interesting to live with marks on your body. You look down when you’re getting dressed, and are reminded of what you did and that connection that you’re trying to make. For years, I was thinking a lot about who I am and my relationship with history. It was a little sad for them to disappear completely.”

However, in 2015, experts discovered two more tattoo marks on Ötzi the Iceman , with the help of multispectral photo imaging. This spurred Wilson to repeat her performance in 2016, this time using a professional tattoo artist. She eventually located Three Kings Tattoo, a studio with locations in New York, Los Angeles, London, and North Carolina. It not only agreed to participate in the project, but also to host a show about it once it was complete.

And that is just what Wilson’s current exhibition Ötzi, which debuted in Boston in May and is now on view in Brooklyn, is all about. Visitors to the exhibition will experience  Ötzi the Iceman through Wilson’s photographs documenting the tattoos as they faded over time. On the reverse of each framed picture, the artist includes source material on the tattoo design.

Also available in the exhibition is a special collection phase folder (editioned at 30), containing items such as the artist book, a screen print of a drawing made in Wilson’s blood, print of the Score (set of instructions for collecting digital files of the tattoos), and an index of a selection of images from the process of tattooing at Three Kings, writes Fad Magazine .

The exhibition offers viewers a chance to participate in Wilson’s fascinating performance. Perhaps, through this experience, she hopes to resist its ephemerality, of which she says, “As empowering as the initial action may be, I cannot keep his marks; they slowly disappear over time and leave me. But, this poetic action simply mirrors that the connection between any two bodies are beholden to the laws of the universe and circumstantial limitation.”

Posted by LT at July 09, 2022
Email ThisBlogThis!Share to TwitterShare to FacebookShare to Pinterest
Labels: Ötzi the Iceman’s Tatoos