WHY DOESN'T JUPITER HAVE RINGS LIKE SATURN? Because it's bigger, Jupiter ought to have larger, more spectacular rings than Saturn. The giant planet's rings should be among the very brightest objects in the night sky of Earth.

AURORAS IN THE USA: Photographer Andrew Harvey has been wondering if he could see auroras from Oregon. The answer is "yes." On July 23rd, a CME struck Earth's magnetic field, allowing Harvey to take this picture from Mount Hood: 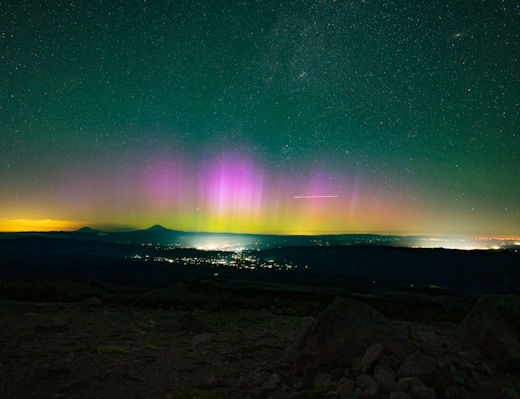 "It was a great show!" says Harvey. "I watched the auroras from Cooper Spur on Mt. Hood at 6813 ft elevation. Lights from the Hood River and The Dalles (the largest city in Wasco County) interfered, but during the peak of the display around midnight, I had no trouble photographing the auroras above the light pollution."

The CME's impact sparked a G1-class geomagnetic storm with photographic auroras in the USA as far south as Shenandoah National Park in Virginia.

Subscribers to our Space Weather Alert Service received a "heads-up" text message 30 minutes before the CME struck, giving photographers time to dash outside and position their cameras.