What was their real name? (not minoan) 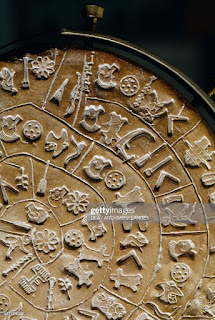 Nanno Marinatos is today the leading expert on Minoan Religion and Ritual. She is the daughter of Spyridon Marinatos the archaeologist who discovered ancient "Thera" also know as Atlantis. Nano Marinatos participated in many excavations in Thera as well as ancient "Avaris".

The Minoan civilization was a civilization which flourished on the Greek island of Krete in the Bronze Age from 2700 to 1350 BCE. It was named by the archaeologist Arthur John Evans after king Minos.

The golden age of the Minoan civilization lasted from around 1700 BCE to around 1400 BCE was also called the Neopalatial period due to the building, destroying, and rebuilding of palaces, chief among them the Knossos Palace.[1]

This culture thrived on trade, and its influence extended over the eastern Mediterranean, usually through peaceful means.[1]

Cattle were valued, especially bulls, and they are mentioned in documents written in Linear B.[2]

The Minoan civilization created its own writing modes, first using what is known as Linear A and then later Linear B, used to record things like business transactions. These were discovered by the archaeologist Arthur John Evans.[3]

A notable amount of Minoan art depicts bulls, the best known example being the Bull-Leaping Fresco, found on the wall of the Knossos Palace.[2]

After 1400 BCE, the Mycenaeans from the mainland Greece conquered Krete, and the Minoan palace centers collapsed, signalling the end of the Minoan civilization.[4]

Due to the extent of the Minoan civilization, it influenced the myths and histories of Greece in general. The Minotaur, 'bull of Minos', and the inhabitant of Daidalos' Labyrinth, lived on in Greek retellings into modern age.[5]