APPING A MAGNETIC SUPERSTORM: Researchers have mapped the best and worst places in the USA to be during a severe geomagnetic storm. For residents of some big cities, the news is not good.

"Resistive structures in the crust and mantle of the Earth make cities along the east coast of the USA especially vulnerable to geomagnetic storms," says Jeffrey Love of the US Geological Survey (USGS), who led the study. "Hazards are greatest for power systems serving Boston, New York, Philadelphia, Baltimore, and Washington, DC, – a megalopolis of over 50 million people." 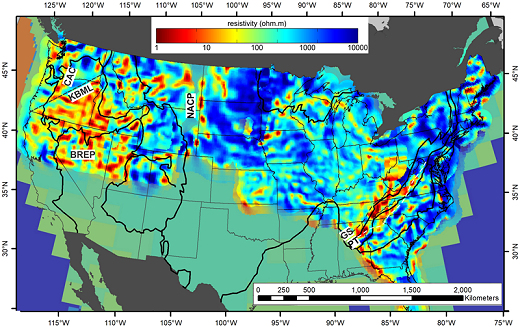 Above: Resistive structures in the crust of the Earth measured by the Earthscope project. Credit: Kelbert et al. (2019) [more]

These conclusions are based on a new study of the biggest geomagnetic storm of the Space Age--the Great Québec Blackout of March 13, 1989. Millions of Quebecois spent a long winter night without lights or heat after a pair of CMEs hammered Earth's magnetic field. The Hydro-Québec power grid was down for more than 9 hours.

What would happen if the same geomagnetic storm struck again? That's what Love's team wanted to find out. They combined old measurements of magnetic activity during the 1989 storm with new measurements of Earth's crust to pinpoint the hazard zones.

At this point, it may be useful to review what happens during a geomagnetic storm. When a CME hits Earth's magnetic field, our magnetic field vibrates. If you had a sensitive-enough compass, you could see the needle quivering. Next, because of Faraday's Law, electrical currents begin to flow through conductors. Power lines, pipes, even rocks conduct these geomagnetically induced currents (GICs). Together, Earth and power lines form an electrical circuit; if too much current flows into the power grid it can cause a blackout.

Above: During a geomagnetic storm, geomagnetically induced current (GIC) flows through power lines and the Earth itself. Credit: GAO

In 1989 researchers didn't know much about the Earth-half of the circuit. That has changed. In 2006, the Earthscope project began sounding our planet's crust to determine the 3D electrical properties of deep rock. It turns out, there are huge variations in conductivity from place to place. The type of rock a city sits on determines how vulnerable it is to geomagnetic storms.

In retrospect, Québec was especially vulnerable. The province sits on an expanse of Precambrian igneous rock that does a poor job conducting electricity. When the March 13th CMEs arrived, storm currents found a more attractive path in the high-voltage transmission lines of Hydro-Québec. Unusual frequencies began to flow through the lines, transformers overheated and circuit breakers tripped.

Assuming that the Québec storm was underway again, Love's team mapped electric fields around much of North America. Measured in units of Volts per kilometer (V/km), these fields predict how much current will be pushed through wires at ground level. The higher the value, the bigger the hazard. 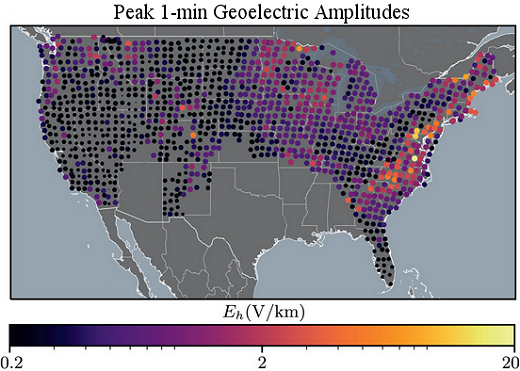 Above: If you live near an orange dot you might be in trouble during a geomagnetic superstorm. The color-coded dots represent peak geoelectric field amplitudes. Credit: Love et al (2022). [movie]