It was caused by a super-powerful lightning strike that made static as far away as Europe. Full story @ Spaceweather.com.

This is an "ELVE"--short for Emissions of Light and Very Low Frequency Perturbations due to Electromagnetic Pulse Sources. It's a rare species of sprite discovered in 1990 by cameras onboard the space shuttle. Ashcraft may have just taken the best ever picture of one from the ground.

"The ELVE was generated by a super-strong lightning stroke that occurred over west Texas near the town of Borger at April 28 2022 0439:10.5326 UT," says Ashcraft. "Note also the sprite elements at the bottom of the ELVE."

The lightning bolt was so strong, it generated an intense electromagnetic pulse (EMP). The red ring marks the spot where the EMP hit Earth's ionosphere. Normal lightning bolts carry 10 to 30 kilo-ampères of current; this bolt was about 10 times stronger than normal. 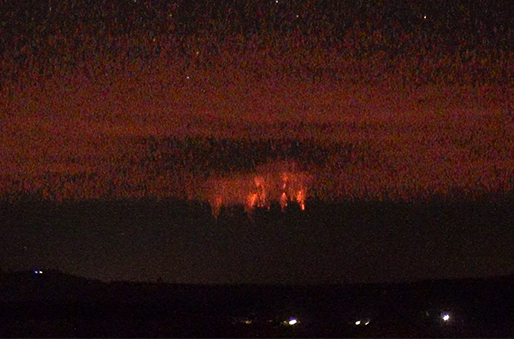 Above: A Tiger ELVE over Texas on April 28, 2022. Credit: Thomas Ashcraft of Heliotown, New Mexico
Posted by LT at May 02, 2022
Email ThisBlogThis!Share to TwitterShare to FacebookShare to Pinterest
Labels: CME, Space Weather