SLIGHT CHANCE OF STORMS TODAY: One of the many CMEs that appeared set to miss Earth this week might hit after all. NOAA analysts say that a glancing blow is possible today, potentially turning Friday the 13th into a lucky day for high-latitude aurora watchers. Minor G1-class geomagnetic storms are possible if the CME grazes Earth's magnetic field.

THE FIRST SUNQUAKE OF SOLAR CYCLE 25: Twenty-six years ago, researchers discovered seismic activity on the sun. A team led by Dr. Alexander Kosovichev, then at Stanford University, found circular waves rippling from the core of some solar flares, like this: 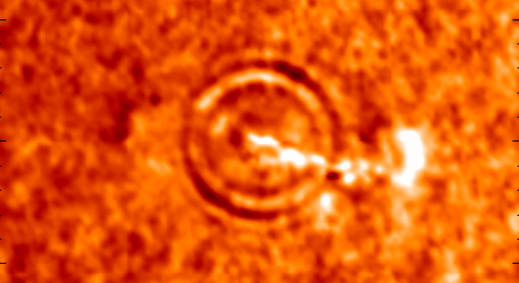 They named the tremors "sunquakes"--much like earthquakes except incredibly more powerful. A typical sunquake contains 40,000 times the energy released in the great San Francisco earthquake of 1906. These solar seismic waves appear to be compression waves like the "P" waves generated by an earthquake. They travel through the sun's interior and probably recombine on the opposite side of the sun to create a faint duplicate of the original ripple pattern.

Kosovichev and colleagues have since observed hundreds of sunquakes. Not all flares produce them, which is a mystery. Moreover, the ripples behave strangely. A typical wave starts off at an initial speed of ~20,000 mph, then accelerates to a maximum of 250,000 mph before disappearing. No one knows exactly why.

"We have just detected the first sunquake of Solar Cycle 25," announces Kosovichev, who is now a professor at the New Jersey Institute of Technology (NJIT). "It rippled away from the X1.5-class solar flare of May 10, 2022." The movie below, centered on the blast site, shows concentric rings emerging from the turbulent surface of the sun:

When Kosovichev discovered sunquakes in 1996, he stretched the images fourfold to highlight the ripples for press releases. This week's sunquake he has left in its raw form--not quite as easy to see, but just as impressive for a different reason. "I wanted people to appreciate how the ripples are nearly overwhelmed by turbulence," he explains. "This is why it took us so long to discover them."

Solar Cycle 25 is intensifying rapidly and many more sunquakes are in the offing. The mysterious ripples could teach researchers a great deal about the magnetic underpinnings of sunspots and how they produce the strongest flares. "We are ready to learn," says Kosovichev.

Posted by LT at May 13, 2022
Email ThisBlogThis!Share to TwitterShare to FacebookShare to Pinterest
Labels: Space Weather, Sunquake