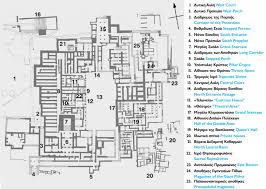 The Minoan Palace Knossos was discovered in 1878 by Minos Kalokairinos.

Sir Arthur Evans conducted systematic excavations at the site between 1900 and 1931, bringing to light the palace, a large section of the Minoan city, and the cemeteries. Since then, the site and the surrounding area have been excavated by the British School of Archaeology at Athens and the 23rd E.P.C.A.

The restoration of the palace to its present form was carried out by Arthur Evans. The interventions were mostly imposed by the need to preserve the monuments uncovered. The Archaeological Service of the Ministry of Culture carries out only consolidation work, whenever necessary.

The advanced level of technology attained by the Minoans is also demonstrated by some original architectural and structural features, such as the light-wells and polythyra, the use of beams to reinforce the masonry, and the complex drainage and water-supply systems.

The palace is set around a large Central Court, an area used for public meetings.

A second courtyard, the West Court, acted both as the official approach to the palace and a ceremonial area.The west wing was occupied by the official rooms for administrative and religious activities, including the Tripartite Shrine, the Sacred Repositories and the Pillar Crypts.The Throne Room is outstanding amongst them, with its lustral basin and the alabaster throne flanked by benches.

The most important areas in the south wing are the South Propylon, the Corridor of the Procession and the South Entrance, with the fresco of the Prince of the Lilies.

The east wing contained the residential quarters and large reception rooms, the most important being the Hall of the Double Axes and the Queen’s Hall. These rooms are approached by the imposing Grand Staircase.

From the North Entrance, a road led to the harbour of Knossos. The North Entrance is flanked by elevated stoas, the one at the west being decorated with the Bull Hunt fresco.

Number One: They were given their name MINOAN by a rich British guy with a shovel.

Number two: I think they forgot that, during the Bronze Age, the Minoans became very, very wealthy from copper trade - a key ingredient to Bronze Age.

Number three: There is growing evidence that the copper they had was actually traded from (possibly) Native Americans who mined surface copper deposits in the upper peninsula. There is matching Minoan DNA evidence in the Ojibwa tribes, as well as Greek words in some Native American languages, and the coppers purity matches. So think about it...

in library of Alexandria along with evidence of relations to South America and Romans destroyed all traces in order to fortify their empire expansion in fight against UK.. until Rome was sacked and by then they forgot about South America]