A sketch of what the Knossos palacemight have looked like

The island of Crete was in ancient times inhabited by a people known as the Minoans. This was due to their cultural ties with Minos, a legendary character who ruled as King of Crete and kept a half ox, half man creature called the Minotaur in the immense labyrinth under his palace at Knossos. According to myth, it was slain by the Greek hero Theseus, who effortlessly found his way out of the maze by following the red thread of Ariadne, Minos’ daughter and mistress of the labyrinth.

The Minoan Civilization is considered the first European civilization historically. They were farmers, seafarers and merchants, exporting goods such as various foods, wine, timber, cypress wood, cloth, wool, olive oil and purple dye. Major trading partners included Cyprus, the Aegean islands, Asia Minor, the Greek mainland, Mesopotamia, Egypt and Syria. In return they were on the receiving end of a stream of different raw materials, such as ivory and various metals (gold, silver, tin, copper etc.) from nearby Egypt, Spain and Cyprus, among others.

Minoans adopted various artistic techniques from their neighbours as well, like Syrian goldsmithing expertise, and the Egyptian aesthetic influence on their wall frescoes are apparent. In other words, Minoan Crete resembled the Near East and Nile Valley more than anything else.

It’s also important to stress the fact that Minoans weren’t Greek at all: the latter first arrived at the scene that was the Aegean around 2000 BCE, whereas the former had lived on Crete since rougly 2900 BCE. However, before 2600 BCE there are few known facts about how the Minoans lived, and historians tend to date their civilization from beginning in 2700–2600 BCE, lasting until 1150 BCE. Until 1900 BCE, the Minoans were not united under the yoke of any powerful landslords or centralized authority. In their early tholos tombs, no hierarchical differentiation was made between people. The Minoans pretty much kept to themselves in separate tribes and village communities.

After 1900 BCE, however, the civilization got its real kickstart. The Minoans began establishing colonies on Thera (Santorini), Kithira, Melos, Rhodes, Kea and other Aegean islands. The first king also came to power during this period. Ancient Crete was one of the first larger thalassocracies, entailing their being a maritime colonial empire with holdings attached to the coastline on on islands.

The Mycenaeans and Minoans didn’t use sound alphabest to the likes of the ones we use today, but rather constructed one based on syllables, a step in the transition from a purely symbolic one. The result was a system constituted of numerous syllable signs, along with other additional symbols and signs not representing sounds. To this day, no scholars or linguistic has managed to crack the code of Linear A (Minoan scrip, earlier), which it has been known as. It’s the successor of Cretan hieroglyphics, which hasn’t been deciphered either. In contrast, Linear B (Mycenaean script, later) was already deciphered in the 1950s, leading to our much more full-fledged and relatively reliable historical account of Mycenaean society.

One possible interpretation of Linear A based on Linear B

After a few prosperous centuries, several of the palaces Minoans had built were destroyed in 1700 BCE.  However, new worthy edifices such as Malia, Knossos and Phaistos were swiftly brought up in their place.

The palace at Knossos was four stories high and the urban area around it was inhabited by 18,000 people in 2000 BCE, leading it to be called the oldest city in Europe. At its peak three centuries later, a whooping 100,000 inhabitants lived in the palace and surrounding city.

As contact with the Greek mainland grew more intimate, the Mycenaean civilization eventually experienced its ascent. This challenged Minoan hegemony, and gradually caused its decline.

In 1375 BCE Knossos was destroyed, but with fantastically extant ruins to this day. Minoan settlements and cities were desolated and abandoned for a long time. Linear B and Mycenaean influence eventually gained ground and displaced Linear B as well as diminishing the significance of Minoan culture.

What caused this collapse, has been a favourite classic discussion among scholars. It may be attributed to military conflicts with/invasions of Crete by the mainland Greeks and the volcanic eruption of Therasomewhere between 1642 and 1540 BCE.  Related earthquakes and massive tsunamis supposedly hit Crete thereafter (the theory hasn’t been fully confirmed as of yet). This has influenced the theory of whether Crete possibly could’ve been the originator and inspiration for the Atlantis myth, first promulgated by Platon in the Classical Era.

What we can be sure of, is that there is definite archaeological proof of how Minoan settlements and palaces were obliterated and suffered material damage from fire. All in all, theories surrounding the downfall of Minoan Crete could be summarized with a likely aggregate of the societal structure breaking down due to fierce competition for wealth, natural environmental havoc and invading Mycenaeans.

Over the course of Minoan history, natural resources such as timber were drained heavily. Timber forests were once abundant on the island, but now it lies for the most part barren.

There were some forms of civilizational continuation taking place after the “destruction” of Minoan Crete; ports such as Phaiston and Knossos continued to be terrific centres of commerce for some time.Remarkable vestiges of Minoan society and culture have been passed down to us, like brilliant writing and road systems, tools, pottery, stunning artwork and a sophisticated trade network. The best exposition of well-preserved Minoan art can be admired in the city of Akrotiri on Santorini, which miraculously survived the Thera eruption. And by the 1200s BCE, it was all over… 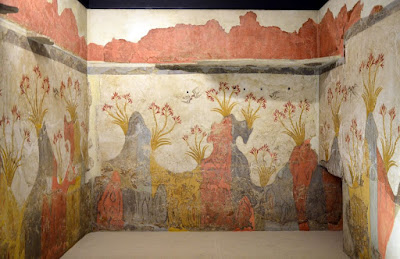