Aluminum (TMA), Barium, Strontium, Sulfur Hexafluoride (SF6), and Lithium have been dumped in space to study and modify space weather for over sixty years (60) and nobody knew. - Big Wobble Blog *** Then there's Z. July 18, 2022 - I was awakened this morning with a clear message that there are three years left until the simulation ends. - ELLIE

On a personal note, we're called to recognize where continuing to fight no longer serves. Humility both requires and generates great strength. Pluto only destroys that which stands in the way of relentless life force energy crashing through the status quo. At some point, we must face the inevitable: the more we resist, the greater the tsunami's force. Once we admit our defeat, we open the door to Grace. - Laura Bruno

Simulation · Walter Russell — The Universal One

1800 eds: The Sami were detached from their history

As with the Torsviggar axes it is possible that the flint spearheads found in the nature were attributed magical powers. Oscar Montelius (1872) writes: ”While the Stone axes have been perceived as “åskviggar” / thorsviggar, the flint arrows has partly been seen as the weapons that the Thunder God hit down with lighting”. In northern and central Sweden several stone axes and chisels are found that resembled and by some were named “flintviggar” [Hildebrand (1870-73)]. However in the 1800eds a tradition developed within Swedish and Nordic archaeology and history with separate interpretation-systems of the Sami and the non-Sami. Archaeological findings of stone axes in the areas traditionally settled by the Sami in the 1800eds were not defined as related to the God Thor, and the Sami were detached from the general Nordic history by the academic establishment. In the text by Hildebrand and Hildebrand it is commented that the flintviggar from the northern areas of Sweden do not seem to have been properly preserved. There are several examples of such findings mentioned in the book by Hildebrand (1870-73) on pages 182 – 184. It is important to remind that the Sami from the earliest times have settled the southern areas of Sweden as well as southern Norway and Finland, but this fact has been uncared for. 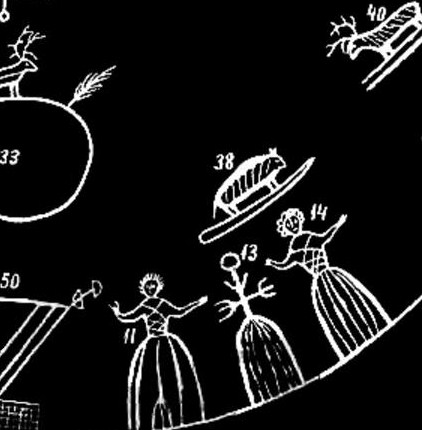