A SUDDEN DROP IN ATMOSPHERIC RADIATION: Last month, a "Cannibal CME" hit Earth, sparking a strong G3-class geomagnetic storm and auroras as far south as California and New Mexico. You might think such a storm would boost radiation in Earth's atmosphere. Think again. High-altitude balloons hurriedly launched by Earth to Sky Calculus during the storm on Nov. 3rd and 4th found just the opposite. Radiation in the stratosphere plummeted: 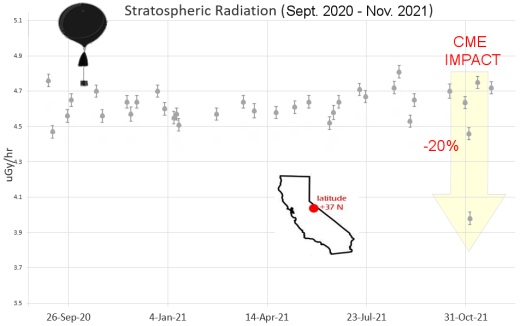 This is called a "Forbush decrease," named after American physicist Scott Forbush who studied cosmic rays in the early 20th century.  It happens when a coronal mass ejection (CME) sweeps past Earth and pushes galactic cosmic rays away from our planet. Radiation from deep space that would normally pepper Earth's upper atmosphere is briefly wiped out.

We have measured Forbush decreases before. For example, here's one from Sept. 2014. The Forbush decrease of Nov. 3-4, 2021, was the deepest in the history of our 7-year atmospheric monitoring program. Radiation levels in the stratosphere over California dropped nearly 20%, more than doubling the previous record from our entire dataset.

Above: This is the CME that caused the Forbush decrease

This event illustrates the yin-yang relationship between solar activity and cosmic rays. As solar activity increases, more and more CMEs billow away from the sun, pushing cosmic rays out of the inner solar system. This is one reason we expect cosmic radiation to subside in the years ahead as young Solar Cycle 25 intensifies
Posted by LT at December 03, 2021
Email ThisBlogThis!Share to TwitterShare to FacebookShare to Pinterest
Labels: Space Weather