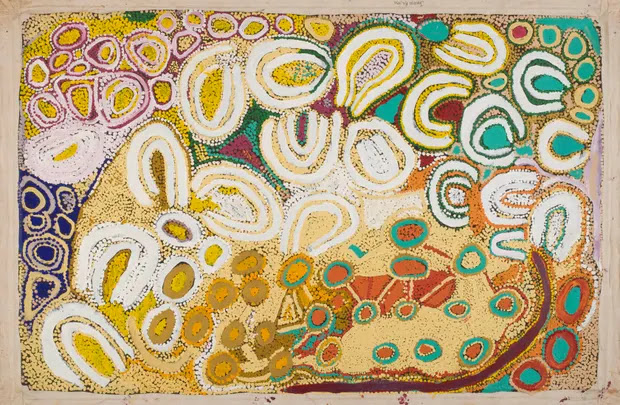 18 Oct 2021
On one level, it is a vivid treat for the eye: astonishing bursts of reds, oranges, yellows that are bound to warm up visitors during the bleak British winter months. But dig deeper and ancient stories about sustainability, community and acceptance that could hardly be better timed emerge.

After being viewed by more than 400,000 people in Australia, winning prizes and attracting rave reviews, the exhibition Songlines: Tracking the Seven Sisters opens this week at The Box in Plymouth on the first leg of a European tour that will take in Paris and Berlin.

The exhibition features more than 300 paintings, photographs, objects – plus elements of song and dance – made by more than 100 Indigenous Australians, mostly women. A “DomeLab” – an immersive video projection gizmo – will transport viewers from south-west England into Australian deserts and caves and up into the solar system.

Margo Neale, a senior indigenous curator at the National Museum of Australia and the lead curator of the exhibition, said it was driven by the desire to preserve songlines, which are hard to sum up in English but might be described as age-old paths of Indigenous knowledge and creation history, for future generations and to share them with the rest of the world.

“This is not an art exhibition, a history exhibition or a science exhibition,” Neale said. “It is all of these. It is both an Australian Aboriginal exhibition and a universal story of humankind. It offers us connectivity to each other and our planet in a fragmenting world.”

Neale has supervised the setting up of the exhibition via Zoom and Microsoft Teams from Canberra as she has been unable to travel to Devon because of Covid restrictions, but she is delighted that the UK is the first port of call outside Australia for the show. “It’s the empire striking back.”

She said Plymouth in particular was a fitting berth because it was the port from which James Cook set sail in 1768 to “settle or invade Australia, depending on which side of the fence you sit on”.

When it was shown in Australia, visitors came time and again and stayed for hours to drink in the exhibition. “It’s really touched a nerve, it’s so right for the moment,” said Neale. “You learn lessons about survival, kinship, marriage rules, what you should and shouldn’t do, what’s proper and what isn’t proper, simple truths about living in harmony, treading lightly, that the country is a member your family, something you cry over, sing to. The land doesn’t belong to us. It’s a story for the whole world.”

The Box only opened a year ago but it has already tried to address how the indigenous people of what is now the US suffered when another ship that sailed from Plymouth, the Mayflower, arrived there.

Posted by LT at November 07, 2021
Email ThisBlogThis!Share to TwitterShare to FacebookShare to Pinterest
Labels: aboriginals, Tracking the Seven Sisters