SPACE WEATHER AND THE RUSSIAN ASAT STRIKE: Russia just destroyed one of its own satellites. On Nov. 15, 2021, a missile launched from the Plesetsk Cosmodrome struck Kosmos 1408, shattering the old satellite into thousands of pieces. Debris came so close to the ISS that astronauts took shelter in their crew capsules, just in case they had to abandon ship.

Littering Earth orbit with debris is never a good idea. Space weather could make it much worse. To understand why, turn back the clock 18 years to the Halloween Storms of October 2003, when our planet "lost" half its satellites. 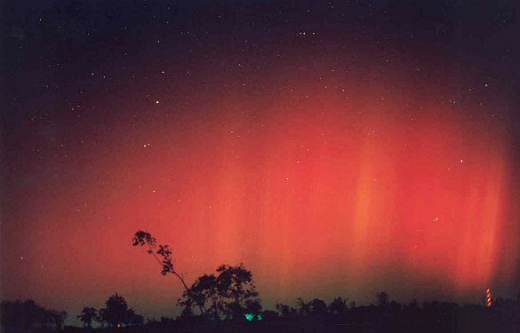 Solar Cycle 23 was winding down. Space weather forecasters were talking about how quiet things would soon become when, suddenly, the sun unleashed two of the strongest solar flares of the Space Age: An X17 flare on Oct. 28th followed by an X10 flare on Oct. 29th. Powerful CMEs struck Earth's magnetic field only 19 hours later, sparking 3 days of severe to extreme geomagnetic storms.

An "after action report" from NOAA lists some of the storm's side effects: Commercial airlines scrambled to redirect flights from the poles, where radiation levels were suddenly high. Each detour cost as much as $100,000. Many Earth-orbiting satellites experienced reboots and even unwanted thruster firings. Some operators simply gave up and turned their instruments off. Goddard's Space Science Mission Operations Team estimates that 59% of NASA's Earth and space science satellites were affected.

There's a dawning awareness that something else important happened, too. Many of Earth's satellites were misplaced.

In a 2020 paper entitled "Flying Through Uncertainty," a team of researchers led by Thomas Berger at the University of Colorado's Space Weather Technology, Research, and Education Center report a little-known anecdote from USAF satellite operators. During the Halloween storms, they recalled, "the majority of [low Earth orbiting] satellites were temporarily lost, requiring several days of around-the-clock work to reestablish [their positions]."

"The Halloween storms pumped an extra 3 Terrawatts of power into Earth's upper atmosphere," explains Martin Mlynczak, principal investigator of NASA's SABER spacecraft, which measured the energy dump. "We didn't feel it down on the planet's surface, but it was a big event for Earth orbiting satellites. The extra power puffed up the atmosphere, sharply increasing aerodynamic drag." 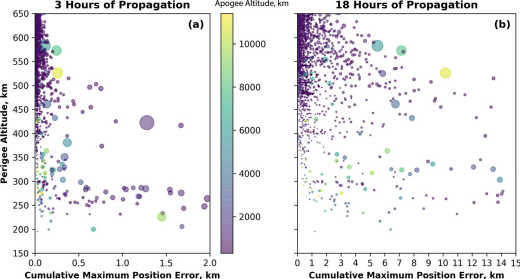 Above: A simulation of orbital position errors caused by a moderate geomagnetic storm for 2,653 objects in the USAF catalog. From "Flying Through Uncertainty." [full caption]

Simulations show that even moderate geomagnetic storms can shift the position of a satellite by 10 km or more. The Halloween Storms created far larger uncertainties. This is a problem because, when you're in a shooting gallery, you can't dodge the bullets unless you know where they are.

"Fortunately, the Halloween storm did not cause any major collisions that we know of," write Berger and his co-authors. "But if a geomagnetic storm on the level of the 2003 event were to occur today, the situation could be very different. Most satellite operators today have never experienced anything like the Halloween 2003 storm."

Right now radars and telescopes in the United States Space Surveillance Network are surely working to pinpoint the debris of Kosmos 1408. Orbital solutions will allow collision warnings to be issued; satellites can dodge. However, a strong geomagnetic storm could wipe out their findings in an instant.

Intensifying geomagnetic activity is almost certain as young Solar Cycle 25 gains steam in the years ahead. It's something to think about the next time you launch an ASAT weapon...

Posted by LT at November 16, 2021
Email ThisBlogThis!Share to TwitterShare to FacebookShare to Pinterest
Labels: space junk