LUNAR ECLIPSE--TONIGHT! It's happening tonight--the longest partial lunar eclipse in more than 600 years. The action begins Nov. 18th at 11:19 pm Pacific Time when the Moon touches Earth's deep-red umbral shadow. For the next 3 1/2 hours, the full Moon be eclipsed with a peak coverage of 97%: 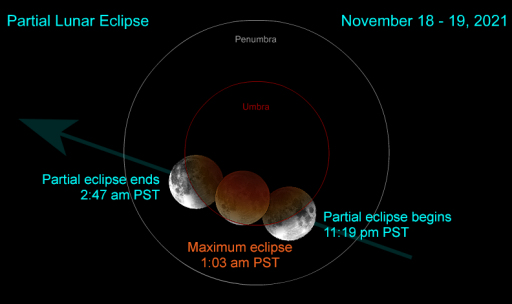 Observers in North America and Pacific islands will have the best view. Click here for a global coverage map.

What makes this eclipse so long? The Moon is near apogee, the farthest point in its orbit around Earth. Because the Moon moves slowly at apogee, it takes longer to cross Earth's shadow. According to Sky & Telescope, this will be the longest partial lunar eclipse since Feb. 18, 1440 — and we won't get a longer one until Feb. 8, 2669.

THE NEXT SOLAR WIND STREAM: Earth is exiting one solar wind stream. Another is on the way. Flowing from a southern hole in the sun's atmosphere, the gaseous material is due to arrive on Nov 21-22. NOAA forecasters say that a corotating interaction region (CIR) traveling just ahead of the stream could spark geomagnetic activity and Arctic auroras on Nov. 20th.

Posted by LT at November 18, 2021
Email ThisBlogThis!Share to TwitterShare to FacebookShare to Pinterest
Labels: lunar eclipse