Above: Auroras over Bayfield, Wisconsin, on Nov. 4, 2021. " Oh wow - what a show! Never thought I'd see such vivid color and SO MUCH RED!!" says photographer Marybeth Kiczenski.
+++
Cosmic rays are a surprisingly "down to Earth" form of space weather. They can seed clouds, trigger lightning, and penetrate commercial airplanes. According to a study from the Harvard T.H. Chan school of public health, crews of aircraft have higher rates of cancer than the general population. The researchers listed cosmic rays, irregular sleep habits, and chemical contaminants as leading risk factors. Somewhat more controversial studies (#1, #2, #3, #4) llink cosmic rays with cardiac arrhythmias and sudden cardiac death.

En route to the stratosphere, our sensors also pass through aviation altitudes: 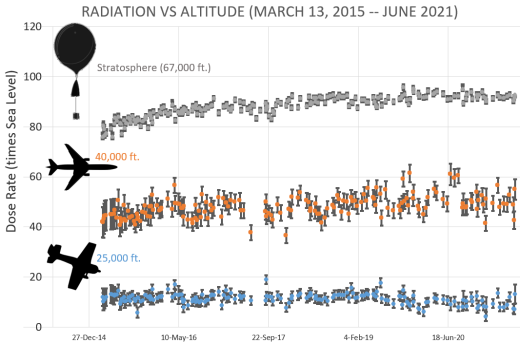 In this plot, dose rates are expessed as multiples of sea level. For instance, we see that boarding a plane that flies at 25,000 feet exposes passengers to dose rates ~10x higher than sea level. At 40,000 feet, the multiplier is closer to 50x. The higher you fly, the more radiation you will absorb.

The radiation sensors onboard our helium balloons detect X-rays and gamma-rays in the energy range 10 keV to 20 MeV. These energies span the range of medical X-ray machines and airport security scanners.

Data points in the first graph ("Stratospheric Radiation") correspond to the peak of the Regener-Pfotzer maximum, which lies about 67,000 feet above central California. When cosmic rays crash into Earth's atmosphere, they produce a spray of secondary particles that is most intense at the entrance to the stratosphere. Physicists Eric Regener and Georg Pfotzer discovered the maximum using balloons in the 1930s and it is what we are measuring today.