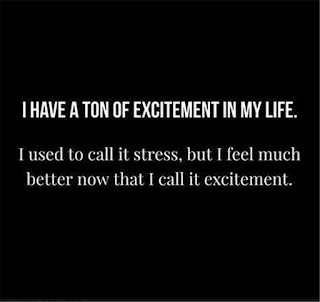 That’s the conclusion of a new paper just published in the research journal Space Weather. The authors, led by Prof. Nathan Schwadron of the University of New Hampshire, show that radiation from deep space is dangerous and intensifying faster than previously expected.

The story begins four years ago (in 2014) when Schwadron and colleagues first sounded the alarm about cosmic rays. Analyzing data from the Cosmic Ray Telescope for the Effects of Radiation (CRaTER) instrument onboard NASA’s Lunar Reconnaissance Orbiter (LRO), they found that cosmic rays in the Earth-Moon system were peaking at levels never before seen in the Space Age. The worsening radiation environment, they pointed out, was a potential peril to astronauts, curtailing how long they could safely travel through space.

This figure from their original 2014 paper shows the number of days a 30-year old male astronaut flying in a spaceship with 10 g/cm2 of aluminum shielding could go before hitting NASA-mandated radiation limits:

Galactic cosmic rays come from outside the solar system. They are a mixture of high-energy photons and sub-atomic particles accelerated toward Earth by supernova explosions and other violent events in the cosmos. Our first line of defense is the sun:  The sun’s magnetic field and solar wind combine to create a porous ‘shield’ that fends off cosmic rays attempting to enter the solar system. The shielding action of the sun is strongest during Solar Maximum and weakest during Solar Minimum–hence the 11-year rhythm of the mission duration plot above.

The problem is, as the authors note in their new paper, the shield is weakening: “Over the last decade, the solar wind has exhibited low densities and magnetic ﬁeld strengths, representing anomalous states that have never been observed during the Space Age. As a result of this remarkably weak solar activity, we have also observed the highest fluxes of cosmic rays.”

Back in 2014, Schwadron et al used a leading model of solar activity to predict how bad cosmic rays would become during the next Solar Minimum, now expected in 2019-2020.  “Our previous work suggested a ∼ 20% increase of dose rates from one solar minimum to the next,” says Schwadron. “In fact, we now see that actual dose rates observed by CRaTER in the last 4 years exceed the predictions by ∼ 10%, showing that the radiation environment is worsening even more rapidly than we expected.” In this plot bright green data points show the recent excess:

The data Schwadron et al have been analyzing come from CRaTER on the LRO spacecraft in orbit around the Moon, which is point-blank exposed to any cosmic radiation the sun allows to pass. Here on Earth, we have two additional lines of defense: the magnetic field and atmosphere of our planet. Both mitigate cosmic rays.

But even on Earth the increase is being felt. The students of Earth to Sky Calculus have been launching space weather balloons to the stratosphere almost weekly since 2015. Sensors onboard those balloons show a 13% increase in radiation (X-rays and gamma-rays) penetrating Earth’s atmosphere: 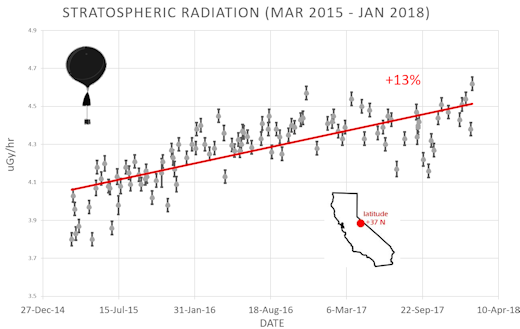 X-rays and gamma-rays detected by these balloons are “secondary cosmic rays,” produced by the crash of primary cosmic rays into Earth’s upper atmosphere. They trace radiation percolating down toward our planet’s surface. The energy range of the sensors, 10 keV to 20 MeV, is similar to that of medical X-ray machines and airport security scanners.

How does this affect us? Cosmic rays penetrate commercial airlines, dosing passengers and flight crews so much that pilots are classified by the International Commission on Radiological Protection as occupational radiation workers. Some research shows that cosmic rays can seed clouds and trigger, potentially altering weather and climate. Furthermore, there are studies ( #1, #2, #3, #4) linking cosmic rays with cardiac arrhythmias in the general population.

Cosmic rays will intensify even more in the years ahead as the sun plunges toward what may be the deepest Solar Minimum in more than a century. Stay tuned for updates.

Cosmic Rays and the Weakening Solar CycleAugust 11, 2020With 1 comment