NOT GOOD but POSSIBLE

A Community of Necessity: The Quabbin Reservoir's History and the Future of "Managed Retreat"

Elisabeth C. Rosenberg is a writer and editor who focuses on the interplay between individuals, demographic groups, and disruptive technology.  Her book Before the Flood: Destruction, Community, and Survival in the Drowned Towns of the Quabbin, is now available from Pegasus Books. 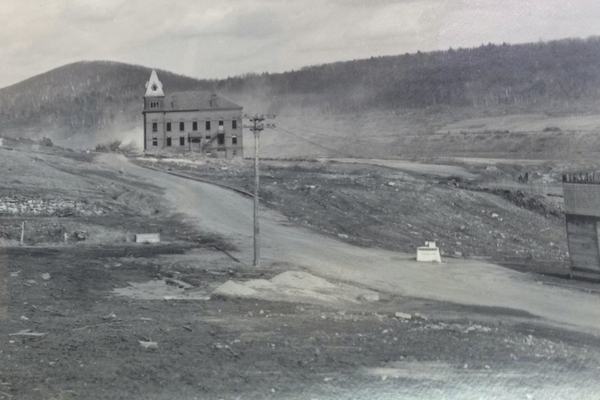 Part of the Swift River valley in Western Massachusetts, prior to the filling of the Quabbin Reservoir, ca. 1938. 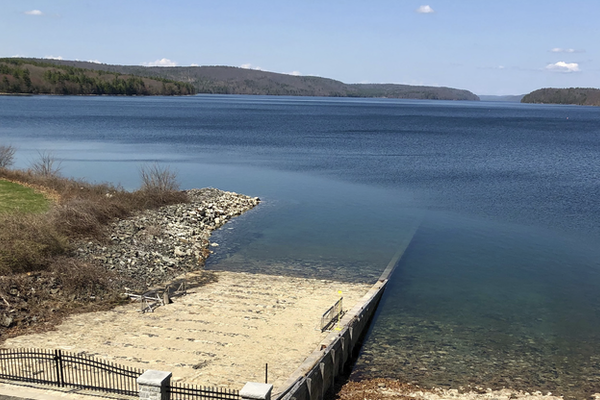 The same general location, under more than 40 feet of water.

On the night of April 27, 1938 the old brick town hall in Enfield, Massachusetts, the largest of four small towns in the state’s western Swift River Valley, was packed so tightly with revelers that the floorboards shook. The orchestra played swing and barn dances; women wore ball gowns or dressed in mourning black. Reporters from across the US had arrived to document the forced gaiety. This “Farewell Ball” was to commemorate the impending demise of the four towns: Enfield, Dana, Greenwich, and Prescott. At the stroke of midnight, they – and sections of surrounding villages - would cease to exist as municipal entities. After more than two hundred years, their names would be removed from maps. They would have no post offices, telephone exchanges, schools, churches, farms, or stores. Every building, tree, bush, crop, and other living thing would to be torn down, torched, and stripped to a moon-like surface.

A year later, the clean and bright Swift River - the beating heart of the Swift River Valley - was sealed shut, and the entire valley, carved from ancient glaciers, was flooded with 412 billion gallons of water to provide a permanent source of pure drinking water for Boston, a metropolis more than an hour away.

From its very founding in the early 17th century, Boston never possessed enough clean water for a growing population. Reservoirs were built further and further west in the state, but need always outstripped capacity. Finally, the Commonwealth of Massachusetts voted on its own “nuclear option”: dam and flood the Swift River Valley, impound the exquisitely clean Swift River, and send it flowing eastward through a network of natural stone tunnels. The catch? The small farming and industrial communities of the valley, populated by 2,500 living people (and nearly three times as many dead), would be gone forever, residents bought out at Depression-era rates and forced from their ancestral homes and farmsteads without hopes for a job or a future.

It was an easy bargain, the state thought. Boston and its suburbs had close to a million residents. Boston boasted large industry, white-collar jobs, tourism, academia, and immigrants flooding into its neighborhoods. The Swift River Valley had… water.  As early as 1895, even as it was building the Wachusett Reservoir in the middle of the state, state politicians and health experts realized the Wachusett would be insufficient and sent engineers out to the valley to test the Swift River for purity. The insular valley residents, perennially suspicious of outsiders, largely refused to believe that their homes and livelihoods would be “taken” for the sake of the big city to the east, but in 1927 the Swift River Act was signed, dooming the valley to a watery grave.

Young engineers, recent graduates from MIT and other top technical schools, arrived immediately, embedding themselves in the very communities they had been sent to destroy. During the day they supervised the building of giant rock tunnels and three dams. They rerouted the Swift River’s primeval rock bed to abut the main dam. Geologists, chemists, and sanitary and soil engineers ensured that the structures were sound and the water remained pure.

In an initially awkward and tense situation, the engineers shared physical space with the locals, renting houses that soon would be destroyed, shopping at the same businesses and attending the same houses of worship. After hours, these young men replaced those who had left their valley homes for better opportunities; they joined civic organizations, played in jazz bands and on baseball teams, and even married the valley’s young women. They stayed because they had to: The main years of the Quabbin Reservoir’s construction coincided with the hardest years of the Depression. Even if the engineers disagreed with the project’s treatment of their new neighbors, they could not afford to quit and find other work. Local residents sometimes needed jobs so badly that they took work as Quabbin laborers, which must have felt like digging their own graves. The Farewell Ball and the other closing rituals that followed filled both locals and engineers with shared grief; they had bonded as part of a strange “community of necessity.”

The valley began flooding in 1939. By 1946 the Quabbin Reservoir had become full enough that its spillway was opened, finally ushering in Boston’s dream of an endless supply of clean, pure water. The area around the reservoir had become a pristine nature area for hiking and fishing. The state had built a beautiful new cemetery nearby where the remains of more than 7,000 valley residents had been reinterred. But the people who had lived in the valley, and had their homes and livelihoods taken from them, were given little recompense. Despite their proximity to the Quabbin, its wonderful water did not flow from their own taps. And many of their descendants still resent the seemingly callous way the state treated the livelihoods and values of those who were displaced.

The Quabbin Reservoir is an unusual manmade body of water in that it was designed, and is used, only for drinking water - one of only five of its kind in the US. And the residents of metropolitan Boston are lucky that, even in a changed-climate future, water will remain plentiful; in years of major drought, such as in the mid-1960s, when people could look down into the reservoir and see the old street grids at the bottom, Quabbin has been a stable water supply. Scientific models show that later this century Massachusetts is only supposed to grow wetter, and for now Boston’s population is growing slowly, so communities served by the Quabbin will most likely not suffer the water shortages increasingly common in the American West.

Still, the ethical issues remain. The residents of the Swift River Valley were treated poorly by the Massachusetts state government in part because of the strictures of the Great Depression and in part because the old, flinty Yankees who lived there were not culturally attenuated to collective action or protest. At the same time, they were given decades of warning – at least for those who chose to pay attention – about their fate, so they could make the best deals for themselves. The ongoing climate emergency, whether it involves too much or too little water, may force governments to push local residents of drought-stricken or flooded communities into what is now referred to as “managed retreat” – an early version of which had mixed success at the Quabbin.

Posted by LT at August 11, 2021
Email ThisBlogThis!Share to TwitterShare to FacebookShare to Pinterest