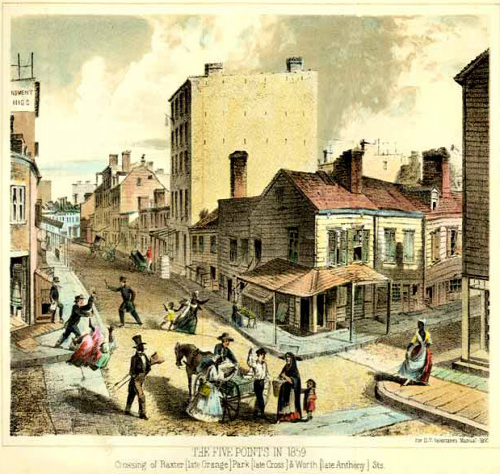 Five Points was the most economically downtrodden neighborhood of all of New York. When starving Irish fleeing the Famine washed up in New York in 1848, it was a short walk to the miserable overcrowded dwellings in the neighborhood.  The weak, sick refugees were cast into a slum that was built on a landfilled pond on whose shores the city’s slaughterhouses stood.  When the buildings began to sag as they settled in the soft ground, anyone who could afford to live somewhere else moved. Filling in the abandoned space were immigrants and blacks.

Posted by LT at May 29, 2021
Email ThisBlogThis!Share to TwitterShare to FacebookShare to Pinterest
Labels: Immigrants, My Family, New York City, Points