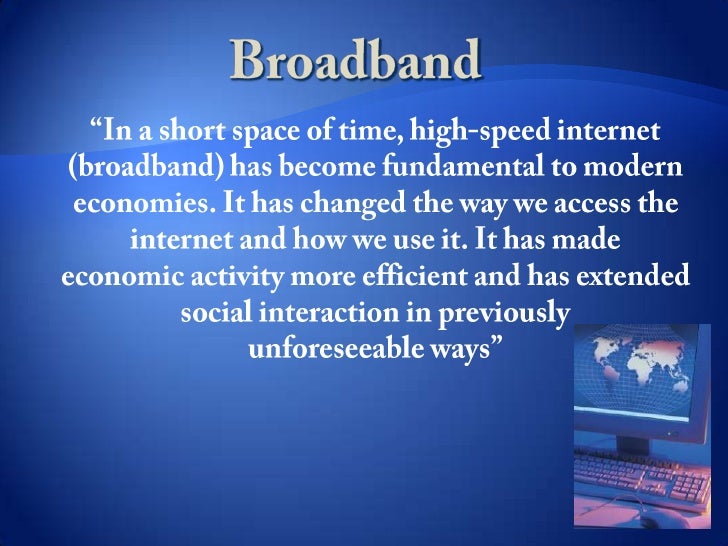 We paid for broadband for YEARS on our cable bills... where is it? What happened? WIFI is dangerous and not what we need. It's bad for our health... TLH

What is the difference between broadband and wifi:

Broadband and Wi-Fi are two terms that have been used interchangeably more often than not. However, these are two separate things and need to be understood clearly so that you get your internet basics right.

To put it simply, Wi-Fi uses radio frequencies and signals to transfer data without wires and broadband is transmission of data with the use of high speed internet.

What is a Broadband Connection?

Broadband refers to wide bandwidth data transmission. Think of the internet as data that's being transmitted between two devices. Broadband, in this case, is the passway on which that data is moving. There are various types of broadband connections - ASL, DSL, Cable, Fiber, etc. All of the technologies aim at offering high-speed internet to their users. For instance, fiber optic cables are by far the best technology that offers its user symmetrical speeds and high bandwidth.

How does a broadband connection work?

Broadband provides the internet by using many lines to transmit a lot of data rather than a single line used by old dial-up connections. Broadband term here means using more than one band to transfer data.

In simple terms, you can assume a dial-up as a one way street where only one vehicle can move at a time whereas broadband is a highway with multiple lanes where multiple vehicles can move together. Here each vehicle is the data packet transmitted to you or vice versa.

Parallel transfer of multiple data packets at a time increases the speed of the internet via broadband.

The below table summarizes the speed and range best suited for both frequency bands.

How does a Wi-Fi connection work?

All Wi-Fi connections work on two frequency bands - 2.4Ghz and 5Ghz in two simple steps - sending data and receiving data. First, a request is sent to your router and modem to access the internet for information. Then, the desired response is sent back to the router via the modem. The router further sends the information back to the device wirelessly.

What’s the difference between broadband and Wi-Fi?

Broadband is a type of internet connection given by your internet service provider.

Wi-Fi is a technology and one of the means of connecting to the broadband to access the internet. Your broadband can be accessed via a LAN cable directly connecting your router and device. However, the advantage of a Wi-Fi connection is the ability to access information without a physical connection between two devices.

Posted by LT at May 17, 2021
Email ThisBlogThis!Share to TwitterShare to FacebookShare to Pinterest
Labels: broadband, wifi