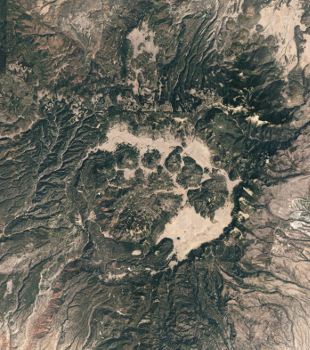 Valles caldera is located in north-central New Mexico in the central Jemez Mountains west of Santa Fe. It is the oldest of three young caldera-type volcanoes in the United States; the other two are Yellowstone in Wyoming and Long Valley in California.
The Valles caldera-forming eruption occurred approximately 1.25 million years ago when huge volumes of Bandelier tuff were explosively evacuated from a underground magma storage region. As a result of the "supereruption," the ground subsided along a network of nearly circular faults, called a ring fracture, leaving the caldera, a 20 x 23 km (12 x 14 mi) depression. Resurgent doming of the central caldera floor occurred between 1.25 and 1.22 million years ago, which was immediately followed by additional dome eruptions around the caldera margins up until about 40,000 years ago.

Here is the opinion:
404 DCT Opinion
An excerpt:

Earlier posts here.
Valles Caldera (or Jemez Caldera), is a 12-mile-wide collapsed volcanic caldera in the Jemez Mountains of northern New Mexico. Within its caldera, Valle Grande is the largest valle (grass valley) and the only one with a paved road.

Valles Caldera is one of the smaller volcanoes in the supervolcano class.

The circular topographic rim of the caldera measures 19 kilometers (12 miles) in diameter. The caldera and surrounding volcanic structures are the most thoroughly studied caldera complex in the United States.
Research studies have concerned the fundamental processes of magmatism, hydrothermal systems, and ore deposition.
Nearly 40 deep cores have been examined, resulting in extensive subsurface data. The Valles Caldera is the younger of two calderas known at this location, having collapsed over and buried the Toledo Caldera, which in turn may have collapsed over yet older calderas. The associated Cerros del Rio volcanic field, which forms the eastern Pajarito Plateau and the Caja del Rio, is older than the Toledo Caldera. These two large calderas formed during eruptions 1.47 million and 1.15 million years ago.[6]
The Caldera and surrounding area continue to be shaped by ongoing volcanic activity.more
Posted by LT at September 28, 2019
Email ThisBlogThis!Share to TwitterShare to FacebookShare to Pinterest
Labels: New Mexico, supervolcano