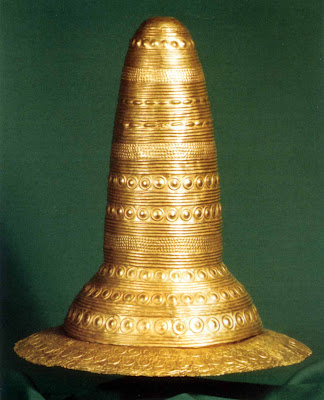 These golden 'Wizard' hats caught my attention earlier for reasons of hats and Sumerian Annunaki I've heard mentioned from time to time. They're both made from one piece of Gold and are over 3000 years old. This corroborates the information I've come across which is that humanity is a lot more sophisticated and ancient than the Darwinian tale of civilisation that began around 5000 years ago. I don't buy that story and so when I discovered that Yemeni women wear similar hats of straw and that the Sumerian or Queen of Sheba connection is right there on the doorstop it caught my attention. It's also worth pointing out the lunar phase symbolism on the taller hat are a logarithmic table that allow the sun and moon to be calculated in advance. Still believe that savage beast tale the Smithsonian would have you believe about humanity?
From that trail I ended up watching quite a new documentary about Al Qaeda in Yemen which brought me up to date on what is roughly going on there (nothing that the U.S. taxpayer should be blowing up) but what really caught my attention was the interview of the FBI interrogator at the end. Both the FBI and PBS interviewer can't wrap their heads around the idea that the CIA are up to their necks in 9/11 inside jobbing and that the entire interview held under sobering camera close ups is a fucking joke. Get a life boys. CIA are running rings round you peasants. Watch it. They're so close to knowing what happened but so far as they're unable to digest reality. Same applies to most people. Struggling to figure out the increasingly obvious. source
Posted by LT at December 23, 2018
Email ThisBlogThis!Share to TwitterShare to FacebookShare to Pinterest
Labels: Mental Midgets